Car Light will develop in the direction of intellectualization, digitalization and individualization

According to the different light sources, car Lights can be divided into bulbs, halogen Lights, xenon Lights and LED lights. LED entered the car Light Market in 1986, the world's first LED brake Light came out, and then LED entered the tail Light, instrument Light, warning Light, daylight, fog Light, turning Light and so on. In 2007, Lexus LS600h launched the world's first LED headLight, so that the LED can be used in car lights. 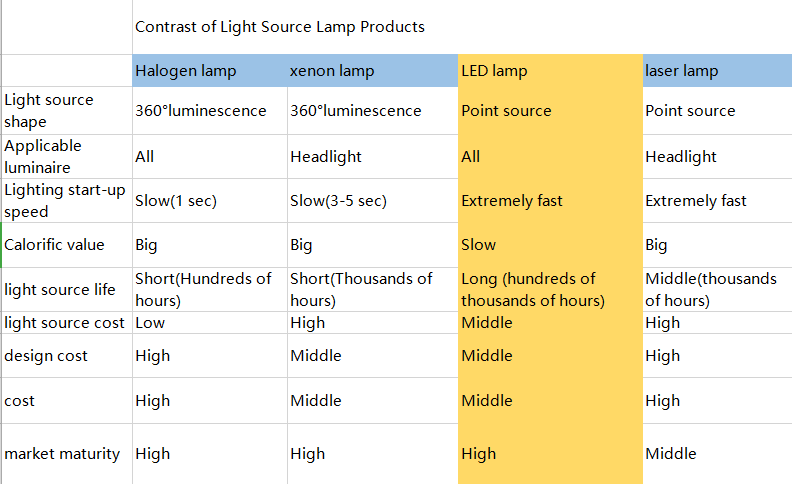 Compared with traditional bulbs, halogen Lights, xenon Lights, LED has multiple comparative advantages, such as: energy saving, easy design, long life, etc. It is expected that in the next few years, LED will gradually replace halogen Light and xenon Light and become the most mainstream type of vehicle Light. Specifically, the advantages of LED Lights are as follows:

(2) Easy to design. LED is a point light source with small volume. Therefore, in the design, the shape can be more diversified to meet the diverse appearance needs of young consumers.

(4) Faster reaction rate. For traditional light bulbs, it takes about 0.2 seconds to delay from opening to lighting, but there is no delay for LED lights, which can be given to the rear car as a reminder at the first time.

(5) In the long run, it has cost advantage. In the short term, compared with halogen Light and xenon Light, LED Light has a higher cost. However, with the sharp decrease of raw materials (mainly LED chips), the price of LED Light will also decrease, which will have a significant cost advantage (at present, the cost of some LED headLights is almost close to xenon Light).

For China, due to the low penetration rate of LED, the large growth space, and the growth potential of the total passenger car sales in China, the expansion rate of the car Light market is expected to exceed the global average. We predict that in 2018-2021, China's car Light market will grow at a compound rate of 9.5%. 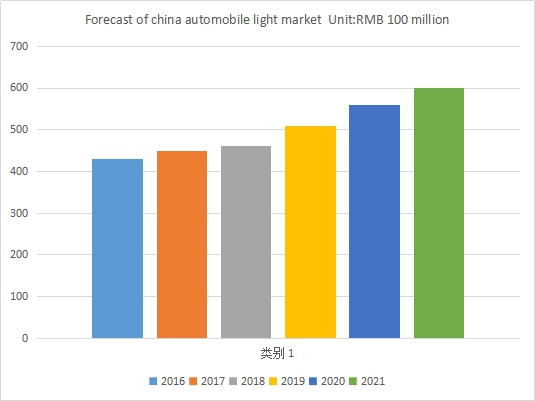 2. The new trend of automobile development brings about the change of car Light demand

Intelligence, networking, electrification and personalization are gradually becoming the development trend of the global automobile industry. The new development trend will make the automobile industry change dramatically in the next few years or even decades. This change will also have a far-reaching impact on the Light industry: the trend of intellectualization and networking requires more intelligent Light, clearer illumination effect and more interactive functions; electrification requires more energy-saving and power-saving Light; personalization requires more brilliant lighting effect and more identification.

From the light source point of view, the Light will gradually penetrate from halogen and xenon to LED and laser; in the optical system, the Light will be developed from mirror, projector to matrix, high definition matrix and LCD; in the sensor area, it will be developed from front camera to radar and lidar; in the function, AFS, far-sighted assistance, anti-dazzling far-sighting, sign Light, pedestrian reminder and other functions will be gradually added.

Intelligence is an important development direction of car Lights in the coming years.

The primary automatic headLight is usually referred to as AFS (Adaptive Frontlighting System), which mainly uses the steering angle, speed and other parameters of the vehicle, and realizes the multi-directional regulation of the headLight through the dimmer, thus achieving specific functions.

AFS usually has a variety of modes, such as high-speed mode, bend mode, town mode and so on.

In the high-speed mode, by raising the headlight, the low-light can illuminate a longer distance, which can make the driver have a wider vision.

In curve mode, AFS can modify the headLight position according to the movement of steering wheel and the change of vehicle's moving direction, so that the headLight can better illuminate the roadside and curve.

In urban mode, the lighting is broader than the basic near-light illumination, which can effectively improve the driver's vision on both sides and prevent pedestrians from suddenly rushing out. It can be realized mainly by rotating the left and right lights to both sides of the road, or through the light distribution design of the light guide in the headLight.

The advanced form of automatic headlamp is usually called ADB (Adaptive Driving Beam), also known as the adaptive high-light system, which can automatically change the distance, angle and area of the high-light according to road conditions. ADB usually controls the light beam by adding a light shield in the lamp or relying on LED particles which can be turned on and off separately.

The use of adaptive headlights can effectively reduce the probability of vehicle accidents at night, and provide effective protection for other traffic participants on the road while ensuring their own safety.

We anticipate that with the rapid decline of ADB cost (the prices of LED light source and electrical components are dropping rapidly), and the improvement of relevant domestic regulations, ADB is expected to become one of the important configurations of passenger cars in the next few years.

Digitalization is another important development trend of car lamp.

The main features of HD digital headlamp are as follows:

Projecting navigation information on the road...

3. LED headlights are in the initial stage of rapid development.

3.1 LED headlights are in the initial stage of rapid development.

As the cost of LED lamp drops rapidly, its advantages over xenon lamp are gradually highlighted, which makes the market scale of LED lamp expand rapidly, and the expansion of its

scale further reduces its manufacturing cost, thus forming a virtuous development cycle. At present, the cost of LED headlamp is almost the same as Xenon headlamp. It is expected that the cost of LED headlamp will be further reduced in the next few years (Chapter II detailed analysis). Therefore, it is expected to gradually replace Xenon headlamp and halogen lamp, and the permeability will increase year by year.

3.2 LED headlights will be stratified

This trend has emerged from some models listed in the market from 2017 to 2018: the new generation Buick Regal in July 2017 has been equipped with matrix headlights; the compact class car listed in June 2018, brand-new Baolai (with a guided price of 1128,000 yuan), is fully equipped with LED headlights (without lenses) and Geely Murray (with a guided price of 788,000 yuan) in August of the same year. LED headlights are used in most configurations.

The main characteristics of matrix headlamps are as follows:

The reaction time can be increased by 1.3 seconds for every 30-metre increase in irradiation range.

Intelligence of the system can alleviate driver fatigue.

3.4 The market scale of LED lamp in China is expected to expand rapidly. 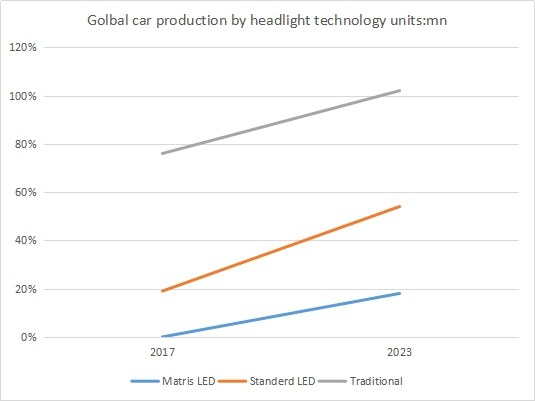 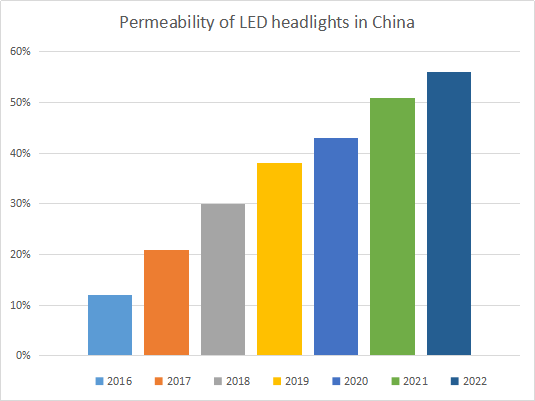