LED lamp cooling is relatively small, LED lamp itself although the heat dissipation is not large, but as a light-emitting BODY LED lamp beads of the core area is very small, such a small area of the instant release of heat is very large, need to use a certain design to actively conduct the heat out, and if the LED lamp does not set up a cooling hole, do not actively dissipate heat, The thermal efficiency of the Led beads decreases rapidly, and the LED can easily burn down due to overheating! 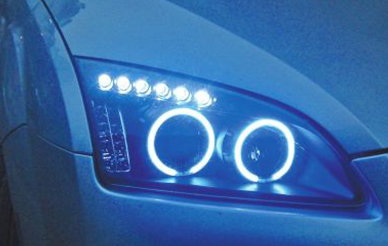 The so-called LED lamp is actually a light-emitting diode, and the principle of the light-emitting diode on the home remote control is the same, LED electro-light conversion rate is only 30%, the remaining 70% will be in the form of heat out, long-term use of course will also heat, especially the power of high-power LED lamp beads are relatively large, Therefore, the heat is also relatively large.

LED common cooling solution is the use of optimized design of the package structure, the use of aluminum-based, ceramic composite metal circuit board to speed up cooling, and then use a fan to force heat dissipation, some will even use copper pipe, tropical and other ways to dissipate heat.

With the continuous development of science, a variety of technologies are constantly applied to the car, where LED headlights is a very good improvement! LED headlights not only high brightness, but also has the advantages of fast start-up, high color temperature, but now the thermal problem is still a key factor restricting its further development!

LED in the light will also produce a lot of heat, it is not less heat production, more than 60 percent of the power of which produces heat, and the temperature on the LED is very large, the higher the temperature, the more intense the light decay!

We all know that the brighter the lamp beads, the more light energy produced, it will produce more heat, which will not only affect the photoelectric conversion of the lamp beads, and even the lamp beads themselves burned! So we have to add a heat sink to it, from the first generation of the passive heat dissipation of the tropics, but it is only about twice the brightness of halogen lamps. If you get higher, the excess heat won't go out. So the second generation, radiator plus fan form appeared, and this time the brightness can also be increased to three to five times halogen lamp! The form of cooling is good in order to improve its brightness and extend its life! Now on the market LED lights in the structure of a large part is to solve the problem of cooling, the lamp body using aluminum alloy and even the use of copper lamp body, behind will have a large radiator, heat sink after the active cooling of fans! So many accessories are to solve the heat dissipation, can see how great the impact of heat dissipation on it!

So, LED is not less heat production, it produces heat is quite large, it is not only thermal holes, now the main market is the fan active cooling way to solve the heat problem, there will be other better technology to solve this problem, let us wait and see! LED lights are not produced waste heat is very little, why led lights must also have a heat sink? Let me just say a few words about my personal understanding of the work of led lights, only for entertainment.

The development of automotive technology is changing rapidly, in recent years, whether it is a joint venture car or domestic car has a qualitative leap, Guangda consumers also witness edgto s(ai also witnessed the improvement of each technology, in which the car headlight technology is also slowly put on the agenda, with the engine, site and transmission as one of the standards of the beam car, a typical representative of the "light factory" Audi.

Car headlights are divided into incandescent lamps, halogen lamps, xenon lamps, led lamps, the first three kinds of lights for various reasons and deficiencies have been slowly replaced by led, many models distinguish between high and low standards is led lamp as the standard, so led is the trend of the development of car headlights.

A light-emitting diode is a solid-state semiconductor device that converts electrical energy into visible light, which can be converted directly into light. Its main component is a semiconductor wafer, one end of the wafer attached to a bracket, one end is negative, the other end is connected to the positive pole of the power supply, so that the entire wafer is encapsulated by epoxy resin.

LED working principle here no longer say, because its own structure determines many characteristics of LED, such as: high thermal conversion rate, less heat, high brightness, fast luminescence, small volume, long service life and good vibration and many other advantages, so more and more car companies and equipment favored But although LED is more and more optimistic, but its own has many shortcomings, such as the structure is more complex, the price is relatively high, the temperature is more obvious.

The working step of LED is that when the current passes through the wafer, the electrons in the N-type semiconductor and the holes in the P-type semiconductor collide violently in the light-emitting layer to produce a photon, which emits energy in the form of photons (that is, the light that everyone sees). Its work The process is unidirectional, that is, there are positive and negative points. Although the heat generated by a single LED is relatively small, the light of a single light-emitting diode is very weak, so all current LED lights are composed of multiple LED units, that is, there are many miniature light-emitting diodes integrated together. As a result, the further heat generation is relatively high. The biggest disadvantage of LED is that it is obviously affected by temperature. Its optimal working temperature is -20-40 ℃. Of course, it is difficult to reach this constant condition. As the temperature rises, it reaches a certain height (45 ℃). (Above), the working efficiency of its PN structure slowly declines, the utilization rate of electrical energy will also decrease, and more heat will be generated, which will form a reverse cycle. Therefore, a heat sink has been introduced in order to solve the effect of heat on the lamp group.